Take style, glamour and great food, mix lavishly with tropical island paradise, and what do you get?  You get Martinique, a visually stunning island in the lesser Antilles of the Caribbean archipelago . . .

Discovered by Christopher Columbus in 1502 and ruled by France since 1635 (give or take a few years of British occupation), this gorgeous isle is now a department of metropolitan France.

And it’s no wonder the French were keen to keep hold of it, for who would want to cut ties with an island with perfect sandy beaches, exotic marine life and picture postcard mountains carpeted with tropical rainforest?

It’s known as the island of flowers and with good reason, for this fertile land boasts 3500 plants and 80 species of palm, not bad going for an island just 80km long and 39km wide.

Up until the present-day Martinique has been most famous for its active volcano, Mount Pelee, which erupted in 1902 destroying the capital Saint-Pierre and killing 30,000 people. 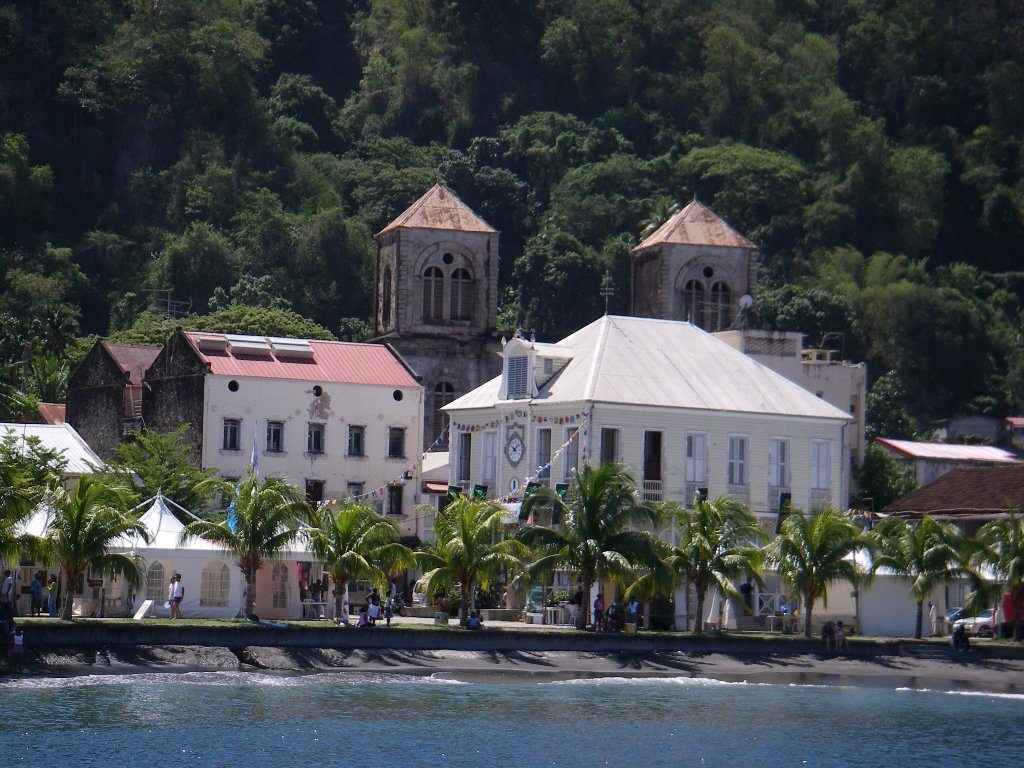 Today tourists can stroll around Saint-Pierre, which sits at the bas of the mountain on the northwest coast and call in at the Vulcanological Museum, which has a collection of fascinating artefacts such as a melted church bell and pottery, found after the volcanic eruptions.

Fort-de-France in the southwest became the island’s capital and it’s clear today that this bustling little metropolis is very much an outpost of France, with chic boutiques, mouth watering patisseries and great architecture to enjoy.

When an island has a winning combination of fascinating history and gorgeous landscape it’s hard to imagine why it doesn’t have the allure of its neighbour, St. Lucia, to British holidaymakers.

The answer is the lack of available direct flights.  Air France currently has 12 regional departure points from the UK to Martinique, but these are all via Paris from where it’s a further 10 hour to the island.  The lengthy journey means it continually loses out to islands that only take eight hours to reach direct.

However, this is starting to change thanks to a rise in the number of tourists who want a twin or multiple destination holidays while they’re in the Caribbean.  Gone are the days when holidaymakers flew out for three weeks and flopped on the beach of an all-inclusive resort, now the discerning tourist is looking for something a little more unusual and adventurous, which is where Martinique comes in. 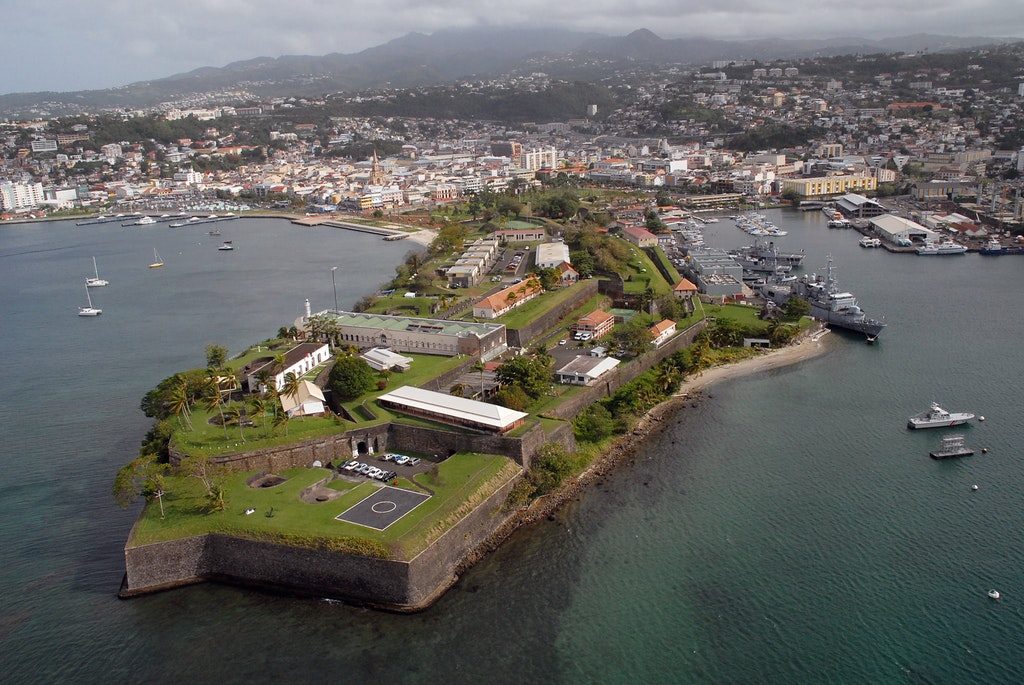 Its neighbours, St. Lucia and Dominica, both take direct flights from the UK and are a breeze of a boat ride or a 15-minute flight away on Caribbean Star.  The beauty is that Martinique offers a totally different holiday experience to these neighbouring isles, thanks to heritage and wealth

It has noticeably better roads, transport, housing and general infrastructure, so is the perfect add-on for tourists who like home from home comforts as well as tropical island trimmings.

Tour operators in the UK featuring Martinique, such as Sunset Faraway Holidays and Onyx International Travel, have already seen the potential of offering an island with great infrastructure, service and accommodation.

Lynn Hinton, the managing director of Onyx International Travel, says that his company began featuring Martinique in its brochures due to the success of other French island destinations. 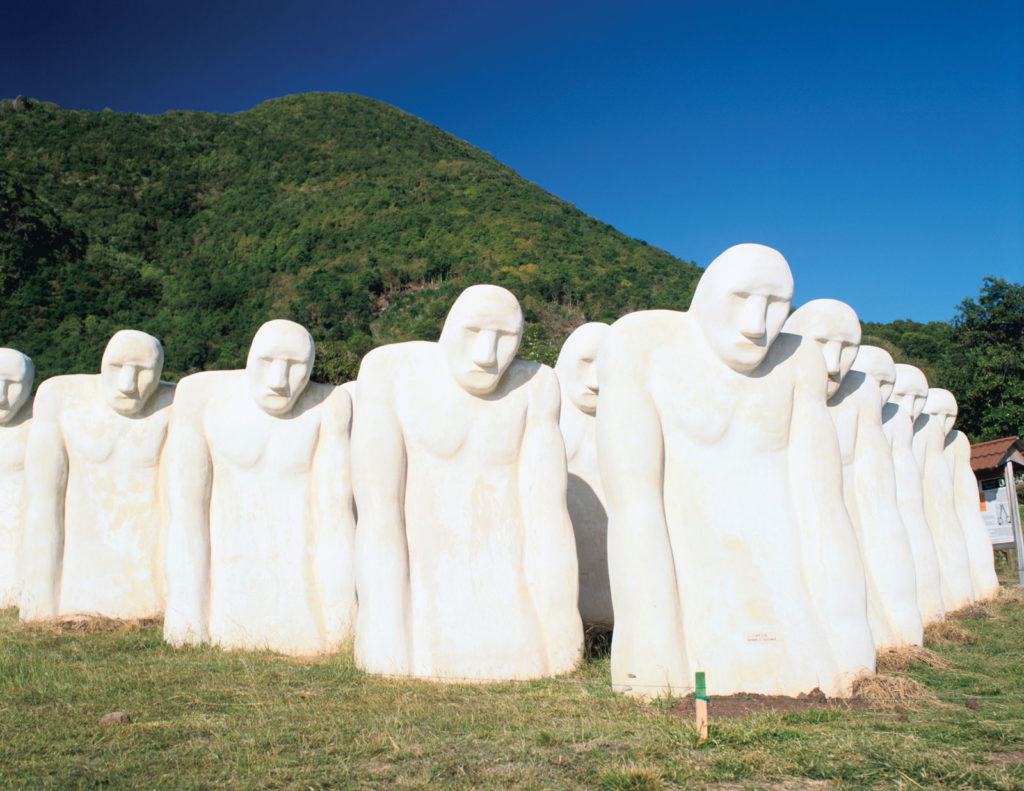 “The success of the market to French Reunion Island in the Indian Ocean led us to consider Martinique and Guadeloupe and it has been building up well”.

Sightseeing
The narrow, balcony-lined streets of the island capital Fort-de-France on the west coast can comfortably be explored by foot.  Worth hunting out are the Saint-Louis Catholic Cathedral on Rue Schoelcher, which has stunning stained-glass windows and the Schoelcher Library on Rue de la Liberte.  Named after Victor Scholcher, a French abolitionist who helped to bring an end to slavery on the island in 1848, it was dismantled and moved brick-by-brick from France following the Paris Exposition in 1889. 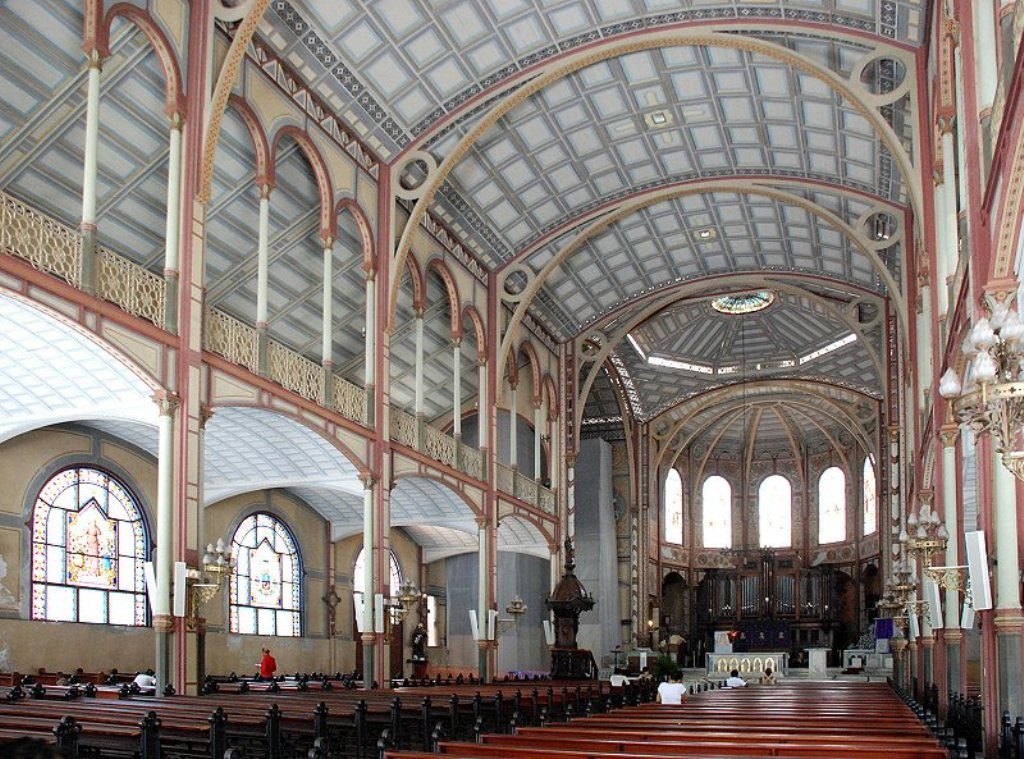 Heading out of the city along the south coast you’ll discover the island’s most stunning stretch of beaches around the Sainte-Anne area, the most famous of which is Plages des Salines, a shimmering mile of white sand where locals and tourists alike gather to sun worship and bathe in the warm, calm sea.

On the way you’ll catch a glimpse of Rocher du Diamant (Diamond Rock), a tiny jewel-shaped volcanic mass in the sea that the British took over in 1804 as part of a plan to attack the island. Legend has it they quickly lost it again after consuming barrels of Alcohol that the French floated over to them.

Also situated on the south west coast is Trois Islets, birth place of napoleon’s Empress Josephine in 1763 and home to the island’s 18-hole golf course.

Nature lovers should head inland to the mountainous north where there are some impressive gardens such as Le Jardin De Balata (www.jardinebalata.com) on the Route de la Trace.  Considered one of the best botanical gardens in the world, it is filled with dozens of varieties of palm, exotic vegetation such as purple ornamental bananas and tranquil lily ponds for resting by and admiring the lush mountainside views.

A trip to the Clement Rum Distillery in Le Francois on the east coast is a fun afternoon out.  You’ll get to sample the local nectar and wander around the plantation house museum, famous on the island as the chosen spot for a summit meeting between presidents Bush and Mitterrand in 1991. 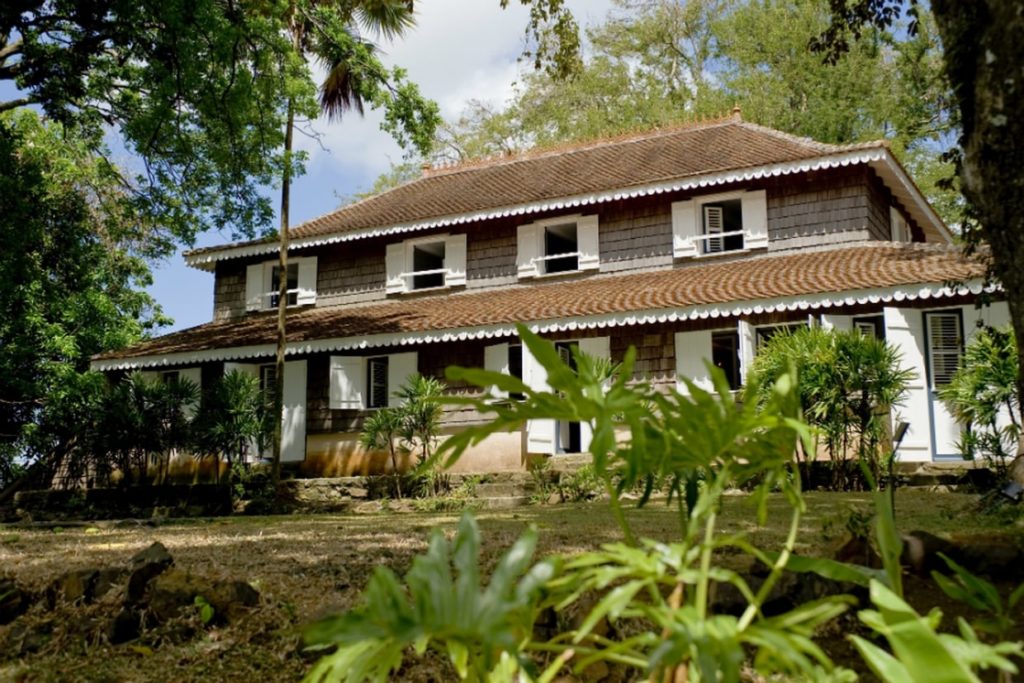 Martinique is ringed by coral reefs which, combined with the warm Caribbean Sea on the island’s west coast, makes it a hot spot for snorkelers and divers.

More exhilarating water sports like surfing, windsurfing and deep game fishing take place on the Atlantic east coast.  If you don’t want to get your feet wet, there’s always the Aquascope, tel: +596 0596 748741; mini submarine at Le Marin on the south coast.

Finally, if you’re the sort of traveller always on the search for something off-the-beaten track then hunt out Thierry Island (www.ifiso.com/ilethierry.com), a blissful James Bond-esque hideaway that lies 10 minutes by boat from Pointe-du-Bout.  You moor alongside a wooden jetty and then trip up ancient stone steps to discover a haven of a five-bedroom holiday home, the only building on the island, which you can the complete run of for a day or week depending on your budget.  It’s the perfect tropical island playground, with swinging hammocks on the veranda, chessboards, and a giant windowless dining room where delicious Creole meals are served up and a boat equipped with snorkelling equipment for underwater fun.  It’s remote, but there are staffs on hands to cater to your every whim 24/7, which is why it costs from US$1,270 per day to hire.

Wine & Dine
Food in Martinique is considered some of the best in the Caribbean by gourmets thanks to its French heritage mixed with a spicy dash of African and Indian influences.

Not to be missed are Ti-Punch, an aperitif of white rum, cane syrup and lemon rind and Accras, small fritters of fish, cod, seafood or vegetables, which are offered everywhere you go.  Be warned, it’s considered rude to turn down an offer so try at least one piece.  Court Bouillon, a tomato and local spice mix for fish, is also a tasty treat.

Unlike many Caribbean islands, Martinique’s best restaurants aren’t necessarily found within the confines of a hotel complex, so it’s well worth taking the time to stroll around the towns and villages to follow your nose and discover which eateries the most delicious smells are emanating from.

Many top-quality restaurants can be found nestling in the streets of Fort-de-France. For hearty French fayre at mid range prices hunt out Le Crew on Rue Ernest Deproge, where you can chow down on fish soup, snails and grilled chicken in a rustic setting.  For excellent Creole dishes at bargain prices try Lina’s café` in Rue Victor Hugo or if you’re looking for a fine dining, romantic experience there’s no better place than La Canne a Sucre where chef Geraud Virginius is creating a buzz with nouvelle cuisine Creole dishes like brioche de langoustine, casserole de chatrou (octopus) and flying fish in chive cream.

In the north, Auberge de la Montagne Pelee in St Pierre is note worthy as much for its setting as for it food.  You can dine on local specialities like calalou aux ciriques, soup with dasheen leaves, while gazing at the slopes of the dormant volcano.

If it’s location that you’re after, however, you can do no better than cheap and cheerful beach shack Chez Lili, which sits right on top of gorgeous Saline Beach, the island’s best stretch of sand and offers a bargain three-course lunch for 15 euro.

Where to Stay
There’s no five star category in Martinique only four stars plus, such as the recently opened:
www. capest.com
Hotel Cap Est Lagoon Resort & Spa, tel: +596 0596 548080.  It lacks Caribbean flavour, with its Japanese-inspired ponds and black and red décor, but certainly fits the luxury tag boasting spacious rooms, exceptional spa and nice strip of beach that has attracted the likes of the Queen of Denmark who stayed in room 12.  Prices from 450 Euros per night.

Mid Range
www. sofitel.com
Sofitel Bakoua Martinique, tel: 0870 609 0964; at La Pointe du Bout, Les Trois Islets has the key ingredients needed to keep families and couple happy on their holiday; palm trees, curve of white sand beach lapped by warm, gentle sea, infinity pool and great restaurant.  There are 134 rooms and five suites, which are basic but comfortable and have the usual trimmings like air con and safe. Chateaubriand restaurant on the ground floor serves up very good Creole cuisine and offers breathtaking views of For-de-France at night.  There are also two bars plus a beach bar on stilts serving cocktails and snacks.  Aqua lovers will want to indulge in the vast choice of activities including boat excursions such as deep-sea fishing and glass boats, snorkelling, scuba diving and wind surfing.
Prices from 190 Euros per night.

Economy
www. pleinsoleil.mq
Hotel Plein Soleil, tel: + 596 0596 380777.  If you’re looking for somewhere that’s off the beaten-track, great value and bursting with character then check into this three-star hotel.
Set high in the lush mountainside of Pointe Thalemont overlooking Francois Bay it’s tiny, with just 12 rooms spread over three brightly coloured villas, each with large balconies.  The main house is decorated with gorgeous Moorish furnishings and original artwork.  Prices from 81 Euros per night.

There are also around 100 villas and apartments for rent and self-catering cottages on the island.