Hidden away in the eastern Caribbean, the small island of St. Eustatius was a treasure island for the pirates who used operate from it and now it’s the perfect hideaway for the visitors who want to explore its riches.  Those who make the effort to get here will find you have left the tourists behind and found a tranquil and friendly spot, with good diving and hiking opportunities Statia, as its known, is a mere 11.8 square miles (30sq km) and has a population of only 2,770 but its long and lively history has been one of most turbulent in the Caribbean and much of that history can be found at the bottom of its clear blue waters in the more than 200 wrecks that lie sunken offshore. 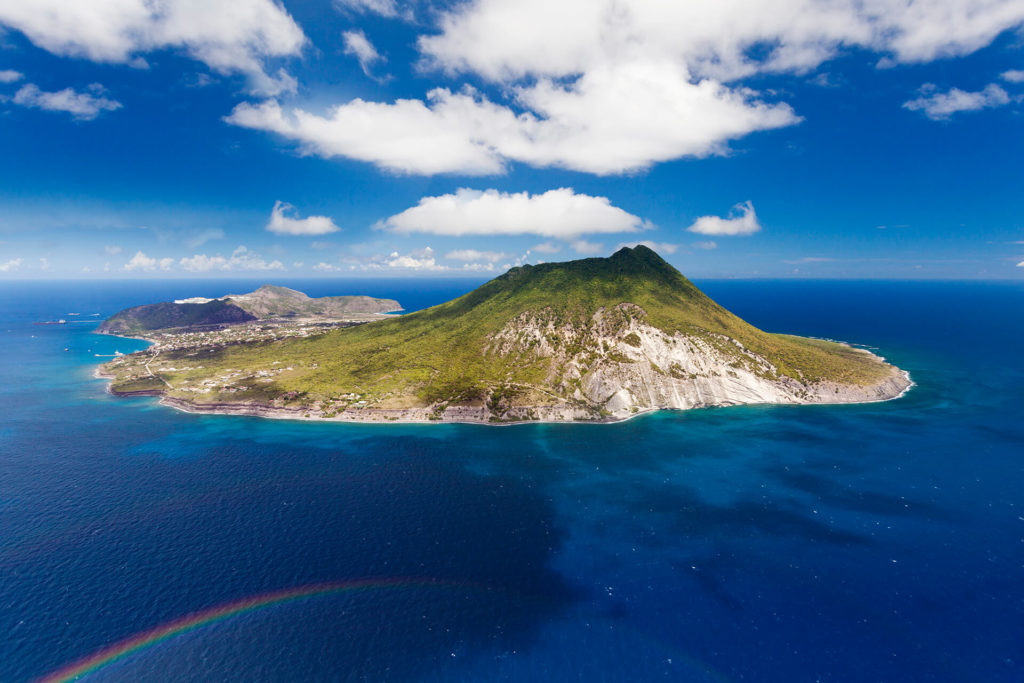 Once a thriving port and slave depot, in the 17th and 18th centuries, the island was one of the Caribbean’s three wealthiest centres for trade, slaving and smuggling.  The island was so wealthy it was named ‘Golden Rock’.  Its warehouses brimmed with textiles, gold, sliver, spices, sugar, rum and guns brought and carried away by thousands of galleons from Europe and America.  Many now lie within a Marine Park created recently to protect sea life and historical artefacts.  There are 33 virgin dive sites featuring coral reefs, drop-offs, canyons and wrecks old and new.  The islanders are serious about conserving their underwater treasures – divers the park must be accompanied by dive operators and anchoring is not permitted.  But divers will agree that underwater Statia continues to be the best kept secret in the Caribbean.

The dormant volcano situated on the south end of the island dominates Statia.  The Quill rises 1,940 feet and invites visitors to hike its lush tropical terrain.  For Eco-tourists and walkers, there are 12 trails, one of which runs up the rim of the Quill and down into its pit.  The floor of the crater is 273 metres above sea level.  There you’ll find a verdant tropical rain forest and magnificent tree ferns are nestled within the enormous hole, Statia’s rugged coastline, coupled with dark sand beaches, offers an intriguing alternative to traditional beach coming.  The island’s capital Oranjestad, where you can see the remains of what was once known as the Emporium of the Eastern Caribbean – so rich that it was fought over 22 times despite being protected by 19 coastal forts, one of which can still be seen.  Other attractions include an award-winning museum, an early Dutch Reformed Church and the ruins of the second-oldest synagogue in the Americas. 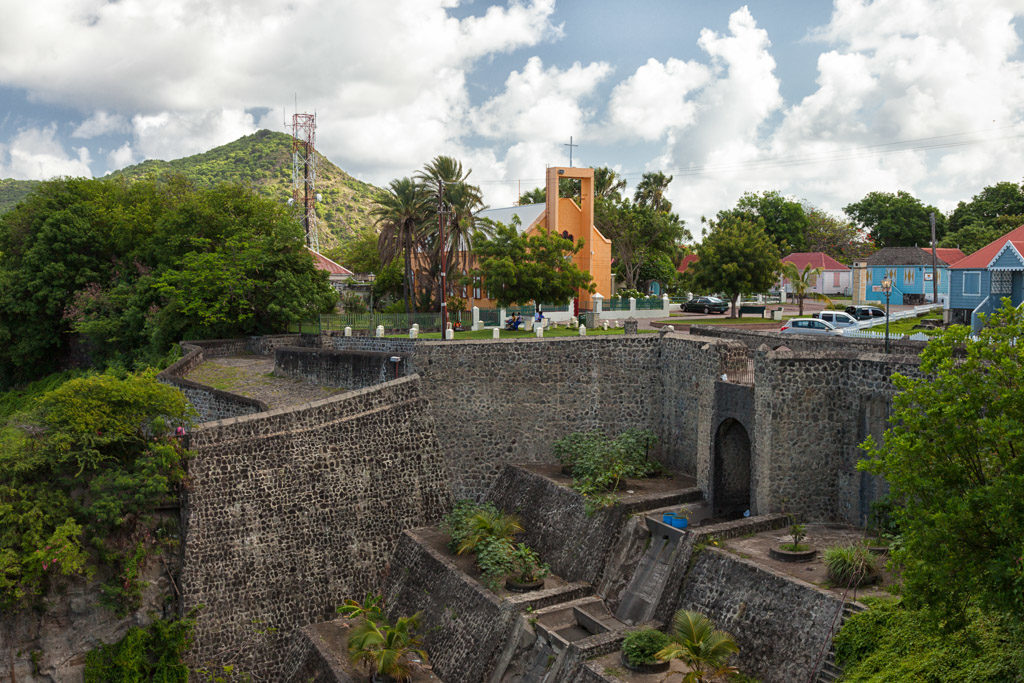 Statia has strong American connections.  In 1776 the island became the first nation in the world to recognise the infant republic of the United States of America when the Dutch governor welcomed and saluted the Andrew Doria, a merchant ship operated by American colonists flying the Stars and Stripes.  In 1781 this brought the wrath of the British on the island when a Royal Navy fleet arrived and used the island’s Dutch flag to lure unsuspecting merchantmen to be plundered.  Today’s visitors will find a more accommodating and intimate welcome.

Sightseeing
Overlooking the Caribbean, Oranjestad, the capital and the only town on the island was once defended by Fort Oranje, where you can visit the preserved ruins.  Oranjestad has an Upper and Lower Town, connected by stone-paved, Fort Road.  Statia once had a large colony of Jewish traders and you can explore the ruins of Honen Dalim, the second oldest Jewish synagogue in the western hemisphere, built around 1740, in Oranjestad. 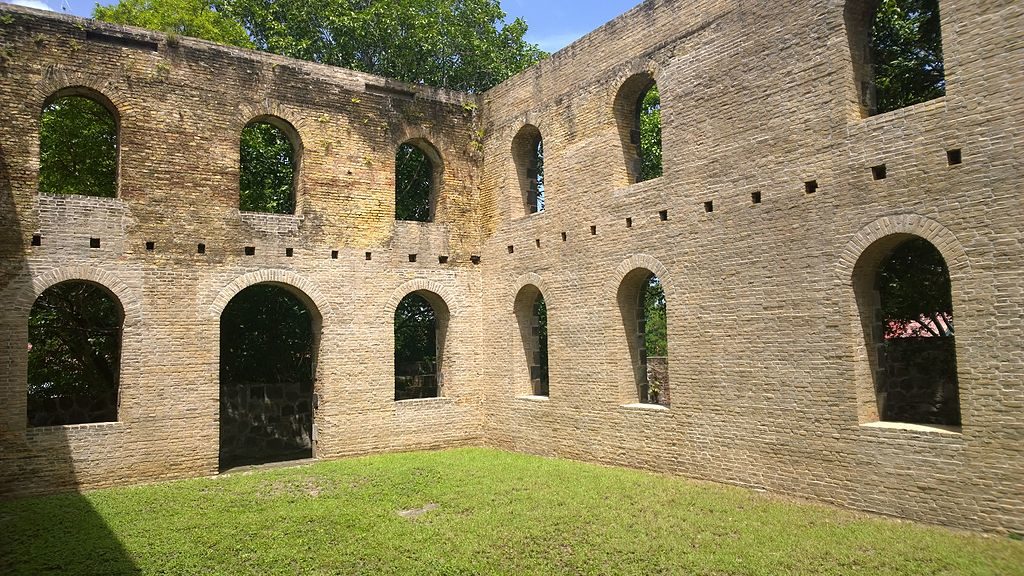 The Museum of the St Estates Historical Foundation is found in the 18th century house of prominent Dutch merchant Simon Doncker.  The house itself is fascinating and now contains the history of the island as a major Slave Depot and charts its involvement in the American Revolution.  The natural wealth of the underwater world will surprise many and it is only now that Statia is being discovered as an important dive destination.  Pristine coral reefs and abundant marine life means world class diving.  You can see the recently discovered famous flying gurnards that live here.  Many vessels have floundered, or been lured to their end, in the waters around St. Estates.  Divers still occasionally discover hidden booty.  Back on land, you can discover more of the natural beauty of the island on one of the 11 exciting and unspoiled marked trails.  Route guide are available from the tourist board.

The Lynch Plantation Museum at Lynch Bay, once the Berkel Family Plantation, depicts life on Statia, a century ago, through antiques, fishing and farming equipment, pictures and old bibles.  From Fort de Windt in the south of the island, there are spectacular views out to sea and of neighbouring St. Kitts.  The Historical Core Renovation Project is restoring the area around Oranjestad where the first Europeans settled in the early 17th century.  Defined by the traditional small wooden dwelling houses, the results are a tribute to the outstanding skills of Statia’s craftsmen.  The whole island comes to life with music, dancing and local food during carnival in late July and August Antillean Day on 21st October is a cultural holiday with celebrations, flag raising ceremony, music, sports and Statia-America day on 16th November commemorates the date in 1776 when Statia became the first land to salute the US flag.

Wine & Dine
Whether you’re here for the day, or spending a couple of nights, there is enough variety of restaurants to keep you well wed throughout your stay.  You will find yourself sharing restaurants to keep and drinks in bars with friendly locals, enjoying their good company and an attractively simple lifestyle-much more peaceful as the island and its visitors bask in the calm that has succeeded its stormy past.  Seafood is the main staple of most menus.

The Old Gin House – tel: +599 318 2319, in Oranjestad is one of the best eating options on the island, a variety of French and Caribbean-influenced dishes are served.  Lunch is normally served on the patio and features fresh fish as well as lighter meals; dinner on the elegant terrace normally features lobster, steaks and curried dishes.  The combined factors of great food and just six tables mean you may have to wait if you show up without a reservation.

The Blue Bead Bar & Restaurant – tel: +599 318 2873, on Gallows bay is an attractive little place just above the water in Lower town that makes a good and inexpensive place for lunch and dinner. Dishes include local grouper, snapper as well as meat dishes and lobster. 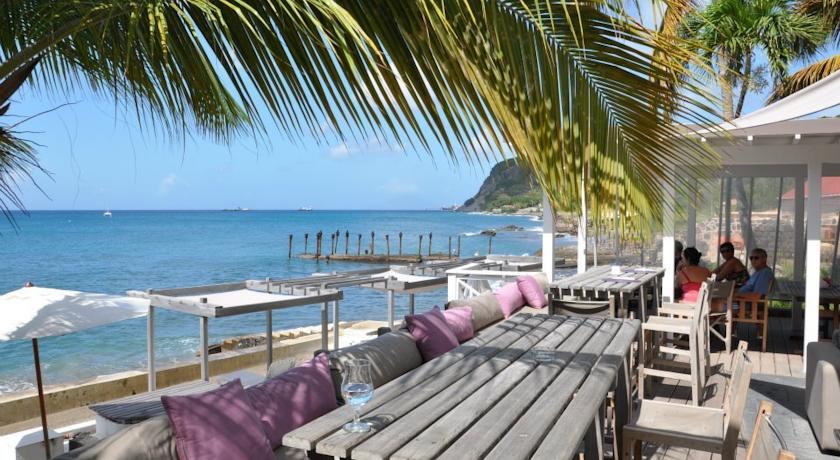 There are just 100 beds on the island, in small hotels and guest houses; choose the right room and you can enjoy a fantastic view out to sea.  You will probably stay in Oranjestad, the island’s main town, which has a few simple guesthouses and a couple of hotels.

www. oldginhouse.com
The Old Gin House – tel: +599 318 2319 is the island’s most luxurious hotel.  An old colonial style building with all mod cons.  There’s a pleasant pool, shaded with palm trees.  Sun loungers and hammocks and the place is handy for town.  Choose from fourteen poolside rooms, plus a couple of ocean-view rooms.  There’s a good restaurant too.

Country Inn Concordia – tel: +599 318 2484, southwest of Zeelandia, has just six rather simple rooms at this longstanding and popular guesthouse, which is ten minutes east of the airport, with nice views of the bay.  All rooms have cable TV and air conditioning.  The friendly owners attract repeat visitors and they’re happy to cook meals on demand.

Language: The official language is Dutch, but English is the “language of everyday life”.