“Even the singing of little birds is such that a man could never wish to leave this place.” So wrote Christopher Columbus on the discovery of the Bahamas islands in 1492. Anyone who’s visited since will know he had a point.

A chain of over 700 islands sweeping in to the ocean south of Florida, the Bahamas’ archetypical Caribbean beauty has captured many a heart. The Beatles, Richard Nixon, and Winston Churchill are among countless well-heeled holidaymakers to have been lured to its shores and each year over three million visitors descend on the islands.

At the crossroads of what was one of the hubs of the world, the Bahamas has a heady history linked to smuggling, slavery, revolution, religious conflict and piracy – the notorious pirate Blackbeard made it his home in the 17th century. The islands fortunes boomed during the Prohibition and tourism soared with the US ban on travel to Cuba in the Sixties.

Independent in 1973 after 325 years of British colonial rule, today the strictly secret banking laws of this ‘Switzerland of the Caribbean’ mean offshore banking flourishes and its celebrated tax haven status has the rich and famous snapping up luxury houses or their own private islands. 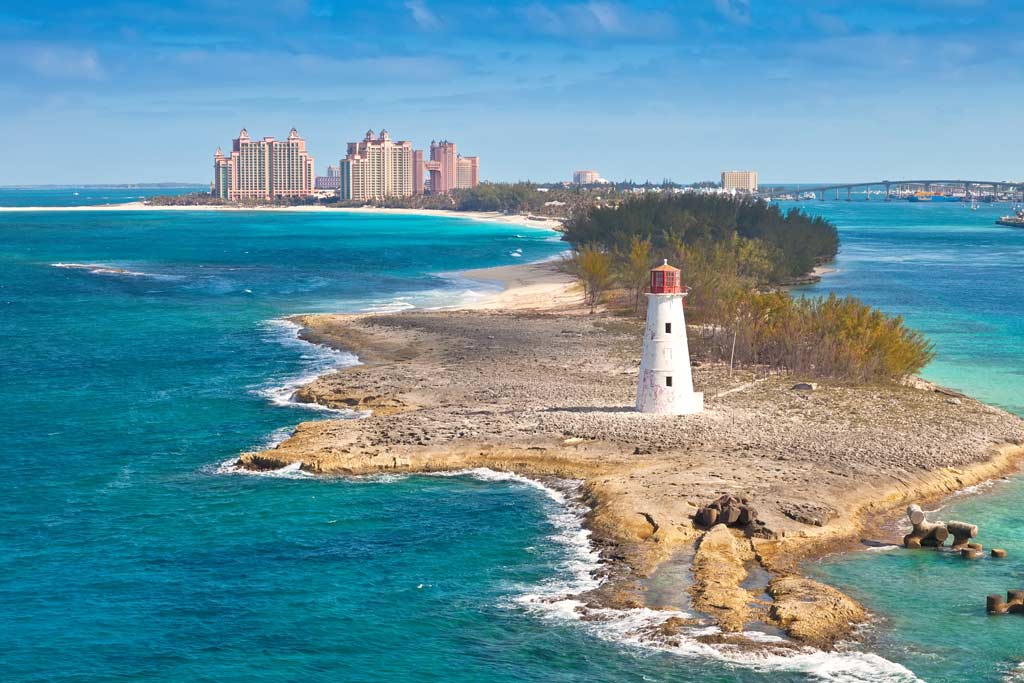 By far the busiest and most visited isle of all is New Providence, home to over 60% of the population and the bustling Bahamian capital Nassau. Stretching around a sheltered harbour on the north coast, the American-like city captivates with its mix of brash modernity, glitzy casinos, old world colonial charm and idyllic setting.

But outside the city centre there’s another world of quiet beaches, Victorian buildings, and limestone houses with wide verandas and tin roofs, ancient forts and old African settlements. Take the glistening white bridge across to Paradise Island and the scene changes again – it’s a sparkling tourist hangout, dense with luxury hotels and up-market accommodation.

Grand Bahamas, the most northerly island, is the next busiest, with the town of Freeport, a gambling paradise, its golf and diving acclaimed worldwide.

Beyond lie the Out Islands such as Andros, boasting the world’s third largest barrier reef. Hemmingway’s favourite fishing haunts Bimini, harbour Island with its pink sandy beaches, the sailing haven of Abacos and Eleuretha, famed for the surf. With only 30 of the 700 islands inhabited, it’s easy to explore an untouched coral reef, disappear in to Mangrove forest or play at Robinson Crusoe on a deserted bay.

While the influence of US proximity and British colonial rule is deep, beyond the main towns life moves to the leisurely West Indian beat and the genuine warmth of the Bahamians shines through. Religion plays an important role, with the church a focal point of the community life. But scratch the surface and you’ll discover a world of storytelling, bush medicine and remnants of the folk religion obeah, a less sinister version of Haitian voodoo.

Like elsewhere in the Caribbean music permeates life. Local rake ‘n scrape bands – featuring guitar, accordion and shakers made from the pods of Poinciana trees – play in the streets or rum shacks, and the islands come alive with the annual Junkanoo festival. Basketball’s a national passion too, wherever you turn there’ll be groups of kids testing their shooting skills on makeshift courts.

With a rich history full of intrigue, terror and romance, the Bahamas has some great places to explore, besides its stunning beaches. The sheer number of islands and rich cultural mix of the population adds to the endless avenues to explore.

Duty free shopping is a key draw – join the well-dressed women gazing at diamond watches and strings of pearls in shop windows on Bay Street in Nassau. A wide range of goods from designer clothes to photographic equipment is up for grabs at knockdown prices in Nassau and on Grand Bahama. At the other end of the shopping scale, Straw markets are found on many of the islands – the one at Nassau is one of the largest in the world, with an array of handmade mats, hats and baskets.

For more cultural pursuits, the islands won’t disappoint either. The former Bahamian capital Dunmore Town is on Harbour Island, and an hour and a half from Nassau by ferry. At its heart is a picturesque scene of pastel-coloured clapboard houses and centuries’ old buildings. The old centre of Nassau holds its own charms; take a horse-drawn carriage around Victorian buildings and the fortress.

Sailing’s a major pastime with day trips to explore other islands or longer charters are available across the region. Beneath the waves the story of the Bahamas continues – this, one of the best diving sites in the world, shipwrecks, particularly off San Salvador, tell tales of the past while the unspoilt coral and teeming marine life continue to attract tourists from across the globe.

The islands offer the chance to swim with dolphins too at Nassau, Grand Bahama and off Bimini and there’s spectacular diving and snorkelling to be had throughout the region – including shark encounter dive trips for those so inclined. With more than 1,000 regularly dived sites, the range is huge with something to suit all levels of experience, from novice divers to old hands, with dramatic coral walls, blue holes and fantastic caves as the backdrop.

The Bahamas is also a world-renowned destination for fishing, whether its bonefishing or deep-sea variety, and nationwide events are throughout the year. Golf’s popular too and there’s plenty of opportunity to tee off at one of the many championship courses found in Nassau, Paradise Island, Grand Bahama, Abaco and Great Exuma.

The Highlight of the Bahamian calendar is Junkamoo, the incredibly colourful festival held on Boxing Day and New Year’s Eve in Nassau. Brought to the islands by African slaves, it was originally a dance ceremony held to celebrate their annual three-day holiday. Huge take to the streets in colourful masks and crepe paper costumes, parading along Bay Street to the rhythm of cowbells, goatskin drums, whistles and horns. Kicking off at 4am on Boxing Day, the fun continues all day with non-stop music, dancing and competitions. 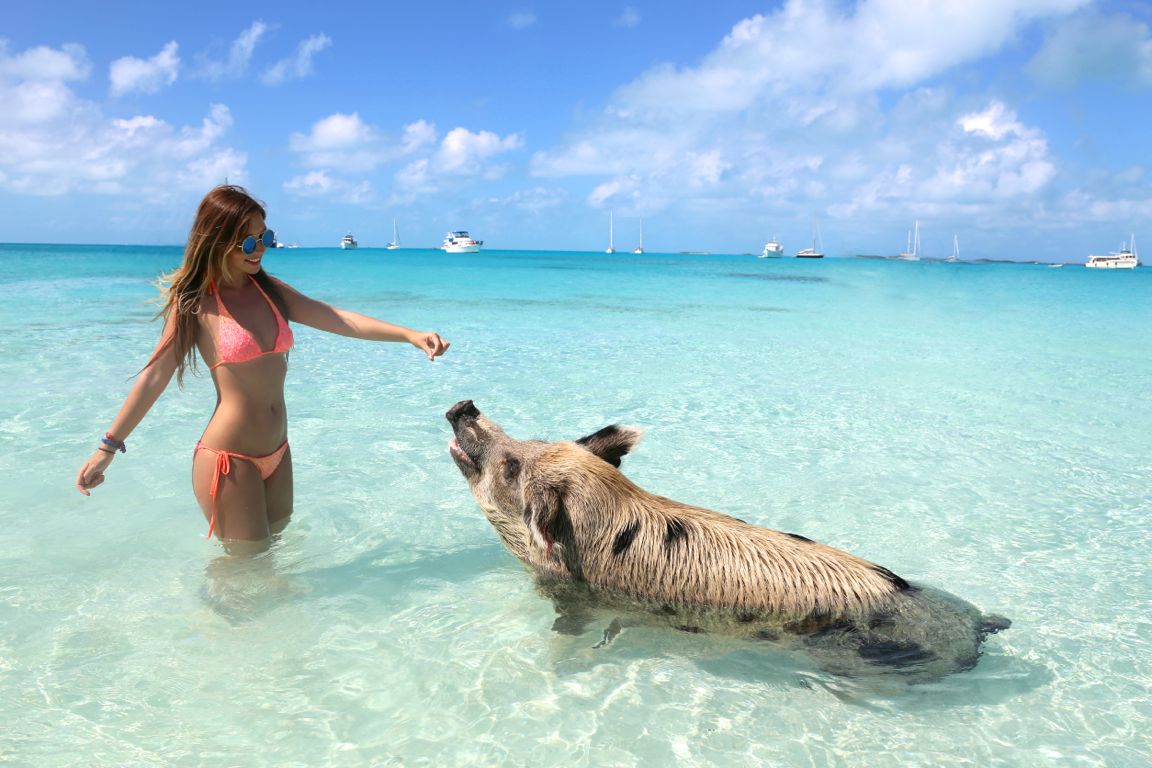 Swimming with Pigs at Pig Beach

The Goombay Summer Festival runs for three months with parades, feasts, street fairs, music and art performance and fashion shows. Other festivals and celebrations take place throughout the year on different islands but Bahamians need no excuse to party and there’s always fun to be had.

Nightlife is among the best in the Caribbean in tourist hotspots, revolving around hotel clubs and bars, with live music, limbo dancing and discos. In Nassau, Paradise Island and Freeport, gambling’s on the menu at the glitzy casinos. Elsewhere it’s more low-key with locals often gathering to chat and play music in unpretentious, makeshift bars.

Check out www. whatsonbahamas.com for all the latest listings.

Cuisine from around the world can be found on the islands, but traditional Bahamian fare is not to be missed. A nation of seafood lovers, crawfish (local rock lobster), conch (a type of molluse), land crabs and various fish – from grouper to red snapper – are all served fresh fro the sea. Conch features widely on menus, in chowder stew, fritters or fried and served with rice and peas. A tomato-based sauce spiced with herbs and peppers is the essence of much cooking and peas ‘n’ rice – black pigeon peas cooked with white rice, pork fat and spice – is a stable diet. Johnnycake, similar to an English scone, is eaten with savoury dishes too. 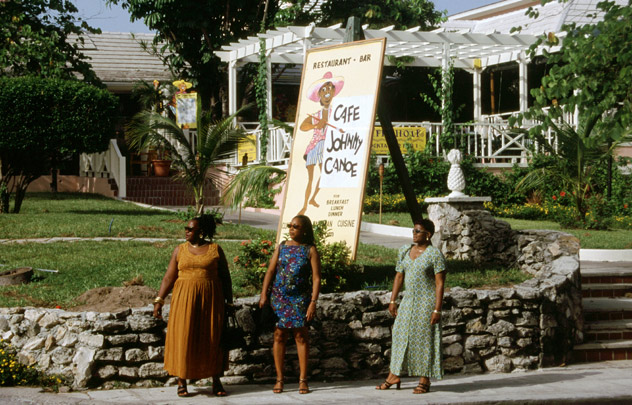 There are hundreds of top quality restaurants to choose from. Of note is Dune, elegantly set on the waterfront at One&Only Ocean Club on Paradise Island with a menu combining French-Asia cuisine with Bahamian influences (+242 363 2501). Headed up by acclaimed chef and restaurateur Jean-George Vongerichten, the British colonial design by Christian Liagre matches up to the cuisine. In the heart of Nassau the famed five-star Graycliff, housed in a 250-year-old Georgian style mansion, serves impeccable international cuisine and holds over 200,000 bottlers of wine in its cellar (+242 363 2501). Café Johnny Canoe, also in Nassau, is known for its truly Bahamian atmosphere, with authentic Junkamoo masks and photos of the old town on the walls (+246 327 3373). But you don’t need to go to an expensive eatery for a superb meal. Places like Chat and Chill in Georgetown, Greta Exuma, offer good value, with conch burgers grilled over an open flame a twist on traditional fare (no Phone). Locals and tourists a like crowd to the weekly Friday night Fish Fry at Arawak Cay, New Providence, where stands barbecuing freshly caught fish serve as tasty tuckers as you’ll find anywhere.

Four Seasons Resort Great Exuma at Emerald Bay a cocoon of sophisticated comfort in a tranquil, tropical bay, the Four Seasons resort Great Exuma is one of the newest hotels on the islands. There are 183 spacious guest rooms and suites, all with expansive terraces or balconies and fantastic views over the coast. There’s an open-air spa offering a range of Asian-influenced treatments – the Little Exuma salt scrub, the island avocado body wrap and the volcanic earth clay ritual – are not to be missed. Golf couldn’t get more picturesque than at the ocean-side, Greg Norman championship golf course. There’s a choice of delicious restaurants too – Il Gielo is a favourite, with floor-to-ceiling glass panels overlooking the pools and the sea beyond.
www. Fourseasons.com/greatexuma (+242 336-6800). From US$275 per room.